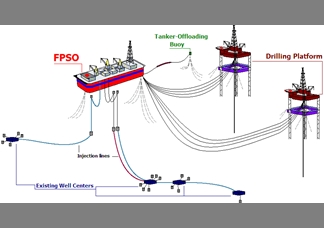 Business intelligence company GlobalData has released a report stating that, through the use of Floating Production Storage and Offloading (FPSO), oil and gas reserves in hard-to-reach oil fields in Brazil will be accessible. The report found that the FPSO industry, which offers safe and economical production from a range of fossil fuel fields, has grown due to initiatives by oil and gas companies to develop in less accessible offshore hubs.
FPSOs provide mobility in shallow, deep and ultra-deep waters, their disconnectable turret-buoy mooring systems allow them to move locations to escape destructive weather conditions, whereas adverse weather conditions can damage infrastructure at oil fields, extensively damaging fixed platforms. This ease of operation and mobility can help companies to avoid substantial monetary losses.
FPSOs can be used to produce in areas with low reserves and in deepwater fields and can be moved to a new location once production is depleted, which saves on cost of installing a fixed platform and set-up time.
At the end of last year, there were 139 active FPSOs in use for offshore production across 26 countries. Brazil, Nigeria and Angola are the largest FPSO-based oil producers, contributing about 50% of the total amount worldwide. Brazil’s huge FPSO-based production capacity from offshore reserves and pre-salt discoveries have significantly boosted the FPSO industry. Petroleo Brasileiro S.A., Brazil’s national oil company currently has 12 active FPSOs offshore of the country, accounting for 13.5% of the total production capacity of FPSOs globally and the company plans to add another 12 FPSOs by 2015, which would be the highest planned production capacity expansion of any country.