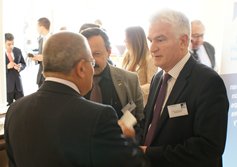 Once a year, the European Association for the taps and valves industry (CEIR) comes together to give updates on the current status of the industry and its member associations. This year the event took place in a little castle just outside Paris, France. Valve World was invited to participate and report straight from the congress room.

Although the CEIR Congress is mainly European focused, there are also several attendees from all around the world participating. For example Mr Shanker from the Indian Valve Association and Mr Sandler from the US Valve Association attend the event regularly in order to get the latest updates on what is going on in Europe. 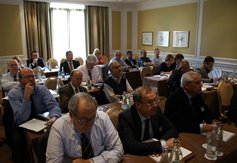 Delegates from all around the world attended
the CEIR 2012 congress near Paris..

The event started off with short words of welcome from the chairmen Mr Haciraifoglu (CEIR) and Mr van Doorslaer (Europump). Following the welcome, Mr Pascal Vinzio from KSB and Second Vice-President CEIR took over the morning session and gave a presentation about the current status of the Industrial and Building Valves Committee. He explained how important this group is at a European level and how it helps and influences pushing forward standardization. He also focused on the work that lies ahead of the working group over the next two years.

Following this more valve oriented session there were several presentations focusing on the sanitary valve and taps industries and a highly interesting session on Water and Energy savings initiatives from the European Commission by Mr Minotti. Earlier in the afternoon Mr Richez, the Technology Department Manager from Total, gave an overview of the Total and French petrochemical industry initiatives on valve suppliers’ quality follow up. The day closed with a Gala Dinner (including partners) where the attendees could sit together, socialize and network with each other.

Mr Pascal Vinizio, KSB, during his presentation
about the current status of the valve
sector within CEIR.

On Saturday morning, the last day of the event, there were three other main sessions focusing, amongst other topics, on the global economic approach in 2012 and the future of the mechanical industries. With a farewell lunch this year’s CEIR congress ended and it was announced that the 2013 event will take place in Belgium.

About the CEIR
The European Committee for the Valve Industry (CEIR) was formed in 1959 as the European federation of national manufacturer associations. CEIR gathers together a large number of European manufacturers in the field of valves and fittings. CEIR supports the principles of a free economy and private enterprise in Europe as well as on a global basis. CEIR represents the common economic, technical and scientific interests of the European valve industries, in particular towards international authorities and economic and commercial circles.

Will you be there?