We probably take our standard of living for granted. A home, a job, food on the table. It all seems so mundane and nothing special.

Yet stop and think for a moment what life would be like if our water supplies were to fail.

Cooking, cleaning, and visiting the lavatory would take on a whole new and unwelcome dimension.

Well, that is the day-to-day reality for an estimated billion people with whom we share this planet, but who lack access to clean, safe drinking water. 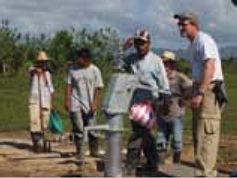 Dave Plum showing how to operate
the hand pump well.

Seeing this reality for themselves in Kenya back in 1990, a group from Houston, Texas, founded Living Water International (LWI) an organization whose goal is to provide local communities with access to fresh water.

To date, LWI has completed more than 10,000 water projects in 26 countries.

These projects rely heavily on the support of volunteers world-wide, and that is where we shift the focus to staff at Emerson Valve Automation.

In recent years, quite a number of folks from Valve Automation have undertaken volunteer work in Honduras, as part of an LWI initiative.

They have travelled deep into the countryside with the aim of helping to install water wells for the benefit of local communities.

One of those striving to help villages acquire safe, clean water is Dave Plum (VP Global Sales and Business Development), who readily agreed to take on the role of Executive Sponsor for this initiative.

Commenting, he said: “We challenged ourselves to not just give funds to support the organization, but to step-up as sponsor for entire well drilling projects”. 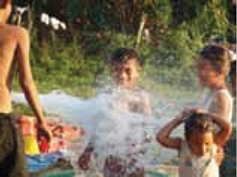 Uva children playing in the first fresh water
from the well.

The cost for a well project in Central America is USD 5,000. These projects drill and install hand-pump style wells that are suitable for operation and maintenance by the local community.

Dave continues: “The wells, on average, are 60-70 feet deep, though can go as far as 120 feet in order to tap into the 2nd or 3rd aquifer, ensuring the water will not be contaminated by run-off or seepage.”

“In a world where children spend their days walking miles and miles just to find drinkable water, we hope to provide a better standard of life. The installation of a well means the children in the village will now have time to go to school and get an education. It’s a first step to help an entire village rise up.”

Early on in the project, Emerson asked if any co-workers would be willing to volunteer for trips to Central America well projects in Honduras, Guatemala, Nicaragua, Panama, El Salvador, etc.

Their response was heartwarming, and the first trip was soon realized to the small village of Uva, in Honduras. Here, the hundred or so inhabitants live off the land, and had no access to power, electricity or fresh water. 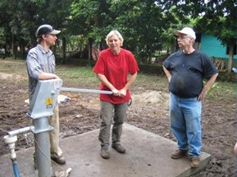 Valve Automation staff had to manually flush
the pump following a compressor failure.

The trip lasted five days and Dave reports that less than an hour after installing the casing, water pure enough for drinking was flowing, bringing joy to the faces of the local children.

Another village to benefit from a new well is Balsamo, again in Honduras. The team had to overcome a couple of hiccups – such as manually flushing out the well when the compressor broke down – but the end result was the provision of fresh water to a community of 3,000 people.

Dave notes: “The days were long, but very enjoyable and rewarding. A special thank you to everyone who supported the trip and the team that traveled. When we choose to contribute beyond ourselves it does indeed make a difference!”

Valve World understands that Valve Automation’s next drilling trip is planned for 1 to 8 December 2012, again in Honduras.

If you would like to support the efforts of the volunteers at Emerson Valve Automation, then please do contact Dave at david.plum@emerson.com.

Greening Process Equipment One Device at a Time