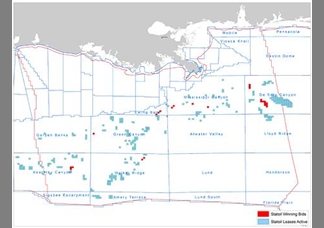 Statoil was the highest bidder in the first lease sale in the Central Gulf of Mexico since March 2010, being awarded 26 leases. This addition will give Statoil control of over 350 leases in the Gulf of Mexico. The lease sale was conducted by the Bureau of Ocean Energy Management.
Statoil’s North American senior vice president of Exploration, Erik Finnstrom stated that the lease additions will allow Statoil to build upon their broad-based strategy of exploration in the Gulf and increase the company’s investment in North America, a region with long-term growth potential.
“Our strategy involves acquiring prospects across a full range of plays – from those at the frontier level to very mature, drill-ready plays. Statoil’s growth in North America has been methodical, based on best practices and technological innovation hone from operating for 40 years in some of the world’s harshest offshore regions,” said Finnstrom.
The company has six producing fields, eight fields under development and is currently drilling the Bioko prospect in the central Gulf of Mexico region. Statoil plans to drill 2-3 more wells offshore Gulf of Mexico in the next 12 months while participating in 2-3 wells drilled by its partners.
Statoil’s winning bids are subject to review and final approval by the BOEM, which may take up to 90 days.