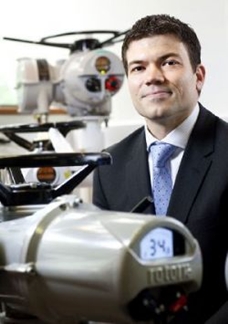 Rotork Flow Control has appointed Andrew Withers as Technical Director for Rotork Controls, the electric valve actuation division of the global engineering group. Mr. Withers will be responsible for new product developments and research functions involving all of Rotork’s electric actuator product lines, in his new position. He will be taking over the position from Graham Ogden who will now focus on developments encompassing all of the Rotork Group division – Controls, Fluid Systems, Gears and Instruments and directing specific strategic group programs in his role as Rotork Group Research and Development Director.
After earning a First Class Honors Degree in Electronic Engineering at the University of Manchester Institute of Science and Technology, Mr. Withers joined Rotork in 2002 as a Graduate Electronics Design Engineer. His work has been closely involved with major product developments embracing Rotork’s intelligent IQ electric actuators, the SI/EH electro-hydraulic actuator ranges, and the innovative CVA electric control valve actuator.
Mr. Withers was promoted to Senior Engineer in 2009 and became Electronics Design Manager in 2011, where he helped introduce the third generation flagship Rotork IQ range of intelligent electric valve actuators.