Valve World Americas had the opportunity to interview Gustavo Omar  Miguelez at the recent Offshore Technology Conference in Houston.  Gustavo is an advisor to the secretary of economic and technology  development for the city of Macae in Brazil.

Macae is considered to be the centre of the Brazilian offshore petroleum industry and is often referred to as “Cidade do Petróleo” (“City of Petroleum”). As a result, it is currently one of the fastest-growing cities in Brazil, with a growth of 600% over the last 10 years. It is Gustavo’s task to find companies that can help continue the growth of the city, and to invite them with information about the city, about Brazil and its support for and investment in the oil and gas industry, and to help them with everything from tax incentives to finding real estate that suits their needs. 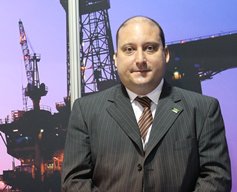 Mr Gustavo Omar Miguelez is an advisor
to the secretary of economic and technology
development for the city of Macae in Brazil.
The city of Macae is specifically nurturing interest from companies with a technological bent, and for them, valves are of specific interest.  Because of the depth of the offshore exploration, there is a real demand to invest a great deal in remote operations.  The fact that the deep sea is such a big challenge requires technologies that will make that exploration and development safer, more efficient and more environmentally sound.

Mr. Miguelez says, “We are also already starting agreements with Norway, France, and are starting now with Aberdeen.  These are countries with a long history in the oil and gas industry, specifically deep sea exploration, and they have a lot to teach us, and to cooperate with these new processes.  We also know that Canada invests a lot in research and innovation, and probably if we have the chance, we will also start a relationship with companies there.”

While the growth has been astounding over the last ten years, Gustavo sees nothing that can change that trend.  He says, “We can see nothing but growth for the next five, maybe even twenty years.  A lot of change and growth.”

We asked Mr. Miguelez what a valve manufacturer could do to get involved in the growth of Macae. He said that he would like to hear from valve manufacturers who have a good track record and a stated intention to share ideas and technology which will help the continued growth of the city and the region.  There are many opportunities to tap into and take advantage of the exciting developments in Brazil’s oil and gas industry.