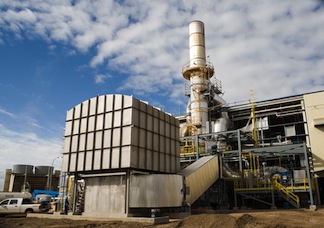 Husky Energy has launched its CO2 capture and liquefaction project located at its Lloydminster, Saskatchewan facility. The project will allow the company to recover more oil from existing fields while reducing ethanol plant emissions. The facility converts about 250 tonnes of CO2 produced by the plant into a high-pressure liquid and has been in operation since mid-March. The plant’s fermentation process uses over 350,000 tonnes of non-food quality corn and grain to produce an estimated 130million liters of ethanol annually. CO2 is a byproduct of the process.
The liquid CO2 is stored in three 900,000gallon bullets on site and then transferred by tanker trucks to heavy oil fields. It is then vaporized for injection into the reservoirs to make it easier to extract the oil, which has the potential to sustain Husky’s heavy oil production for many years in that area.
The Canadian federal government’s ecoENERGY Technology Initiative gave Husky CAD$14.5million to develop and demonstrate carbon capture and storage innovations. Husky was one of eight Western Canadian companies to receive funding. The Saskatchewan provincial government has also provided funding through its Petroleum Research Incentive Program for the field piloting program.

A Need for Carbon Capture & NETs: A Growing Sector for the Valve Industry

ExxonMobil to Expand Carbon Capture and Storage in Wyoming