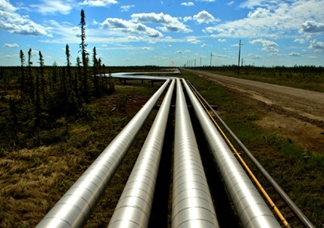 The launch of the Northern Gateway public hearings was tense, as hundreds of people attended to speak on Enbridge’s controversial proposal to connect the Alberta oil sands to a port in Kitamaat Village, B.C. to export to Asia.
As the proposal affects the land of many First Nations groups, several group leaders spoke at the hearing to voice their opposition to the pipe line. Many expressed concern about the possibility of a pipeline break or oil spill contaminating their land and surrounding waters and threatening their lifestyle, while others have signed deals with Enbridge for a stake in the venture.
Local trade workers argued the importance of the number of jobs the pipeline proposes to create and the benefit to the economy that would come from the proposal going through. The hearings, being conducted by an independent federal review panel are expected to last until 2013 with over 4,300 people and groups registered to speak. Officials from Enbridge are attending the hearings and will be making presentations later in the process.