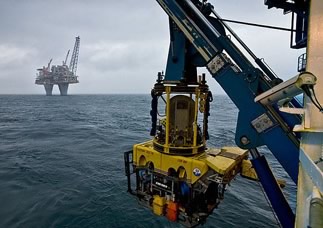 Chevron Corp has reported that while its subsidiary, Chevron Brasil Upstream Frade Ltda., has not received formal notice from Brazil’s National Petroleum Agency (ANP) suspending its drilling license, the company has voluntarily suspended its current and future drilling operations, offshore Brazil. The voluntary suspension includes the company’s permitted pre-salt wells in the Frade field with the exception of current plug and abandonment activities. The suspension is indefinite. Chevron acknowledges, however, that ANP has posted a notice of suspension to its website. Chevron’s decision to suspend its drilling operations has no impact on its current production in the Frade field or on other Frade field operations. Production from the Frade field is approximately 79,000 bpd of oil equivalent. Chevron had previously suspended development drilling in the Frade field on November 9 after it became aware of oil migrating from seep lines in the ocean floor. Chevron also reports that the volume of oil currently contained in the sheen on the ocean’s surface has been further reduced to about one barrel through cleaning and dispersion methods approved by Brazilian authorities. Chevron was successful in stopping the primary source of the oil sheen on November 14.