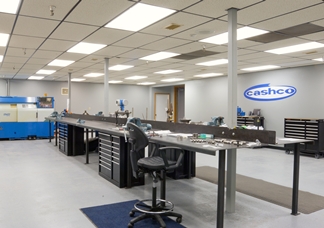 Cashco, Inc. has opened a new engineering lab at the company’s headquarters in central Kansas. As research and development represent an important investment for any company with a goal of continually improving existing products and introducing new innovations, Cashco, Inc., feels this will help improve customer service and product delivery.
“First, it will allow the engineering department to fabricate all its own prototype parts,” says Clint Rogers, General Manager, Valve Division, Cashco, Inc. “This will improve project lead time — a significant portion of new project schedule — while relieving the machine shop of valuable fabrication time, allowing them to build saleable products.”
“The increased workspace in the lab expansion will also provide the necessary space to perform VCI product prototype testing within the engineering lab,” Rogers adds. “This is an improvement over the previous requirement of testing on an assembly production test fixture, often times interfering with live orders.”
In addition to relieving strain on the assembly area, the new lab will also allow the research and development department to construct parts via computer-aided manufacturing (CAD) and test longer piping systems, which may be required as part of an ISA test setup. Two extra-long workbenches in the lab will also allow technicians to better replicate a customer’s application and fine-tune the test setup. Rogers says the roomy floor plan and dedicated workstations will allow a variety of R & D projects to be performed simultaneously.
In the past year, the company additionally installed a vacuum form machine, giving them the ability to manufacture its own thermoform plastic parts, such as diaphragms and weather hoods. In the meantime, they implemented electronic documentation of all orders, while archiving all previous paper files.
Customers around the world can also be assured that Cashco products meet the highest standards, no matter the import country, as the company has received compliance with the Pressure Equipment Directive (PED) through TUV America as the authorized notified body; qualified all PED welders to British EN 287 standards; configured a test plan for EPA Method 21 testing for fugitive emissions; renewed all ASTM standards currently in use; and received certificates of conformance documenting compliance with British standard EN 10204, Type 2.1.