Petroleo Brasileiro SA (Petrobras) is set to install a third offshore LNG terminal in the Bay of All Saints. The Bahia regasification terminal (TRBA) will have the capacity to regasify 14 million CUM/day and will supply natural gas to the state of Bahia. The terminal will interconnect with a pipeline network at two sites: one in the Bahia network, at Candeias, and the other at kilometer 910 on the Cacimbas-Catu pipeline, a section of the Southeast-Northeast Gas Pipeline started up in March 2010. Work will begin in March 2012, with completion scheduled for August 2013 under an investment of nearly $425 million. When the TRBA terminal comes online in September 2013, LNG will be transferred directly from the supply vessel over short hoses or loading arms to the regasification vessel, which will convert LNG back into a vapor. Gas will then be injected into the pipeline network through a 28-in. pipeline that is 49 km long including a 15-km subsea section. 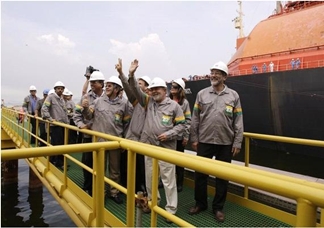