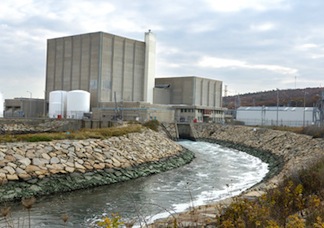 Entergy’s 660MW Pilgrim nuclear plant in Plymouth, Massachusetts has been authorized by the Nuclear Regulatory Commission to continuing operating for an additional 20 years, until mid-2032. The 40-year operating license currently active at the Pilgrim plant was to expire on June 8th.
Greg Jaczko, outgoing NRC Chairman was the sole voter against the license extension of the five member committee. Jaczko was also the only member to vote against the issuance of new nuclear plant licenses issued in South Carolina and Georgia earlier this year, that were the first approved in over 30 years.
Entergy is negotiating a new labor agreement with Utility Workers Union of America Local 369. The labor contract expired in May and the company is working to reach a new four-year agreement. A federal mediator has been brought in to aid in resolving issues.
The license renewal application for Pilgrim was filed by Entergy Nuclear on January 26th, 2006, giving the NRC six years to review making it the longest license review on record.