A robust actuation solution capable of performing at high altitudes has been supplied by AUMA to the Collahuasi copper mine in a mountainous region of northern Chile. Sixty modular electric actuators automate valves controlling materials that travel through pipelines starting 4,300m above sea level.
The mine is one of the world’s largest non-ferrous projects set in an area with a rich copper mining history. Commissioned in 1999, an expansion program at the mine has given a long-term capacity of 500,000 tns/yr of copper.
Process facilities include a 60,000 tpd sulfide concentrator and a 50,000 tpa cathode copper oxide heap leach-SX-EW facility. After grinding, the ore is treated by flotation and concentrate regrinding to produce a high grade concentrate that is transported 200 km in a slurry pipeline from the mine to a port. AUMA’s actuators with three phase AC motors and gearboxes are installed at the pipeline’s ‘choke station’, so called because material needs to be slowed down after it has accelerated in transit.
Challenges met by AUMA’s actuators included climatic environmental conditions, very low temperatures at night and extremely high temperatures during the day. Economical three phase motors carrying alternating currents and corrosion protection were important product features that benefited the application.
A track record for AUMA supplying modular electric actuators for mining installations includes an installation at the ‘Los Bronces’ mine, also located in Chile. 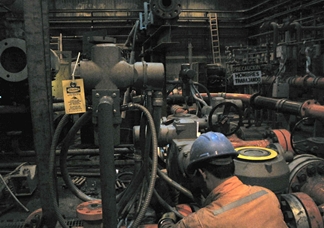